How can you support Black Owned Businesses?

The History of The Black Market

The City’s Engineering Department has worked with the United States Postal Service, emergency service providers, utilities, and others. Due to the Omicron variant, a formal dedication will be held in the spring.

The new street name was recommended by a specially convened task force. It honors the Eagleson family, a prominent Black family in Bloomington for four generations whose members have made significant contributions to the city, university, state, and nation, starting with Halson Vashon Eagleson I (1851-1921), born a slave who came to Bloomington in the 1880s.

“Today, we celebrate and honor the significant contributions made by the Eagleson family to Bloomington and with this street name change we illustrate our community’s core values,” said Mayor John Hamilton. “I’d like to thank the task force members and City staff who worked so hard to make this happen.”      ​ 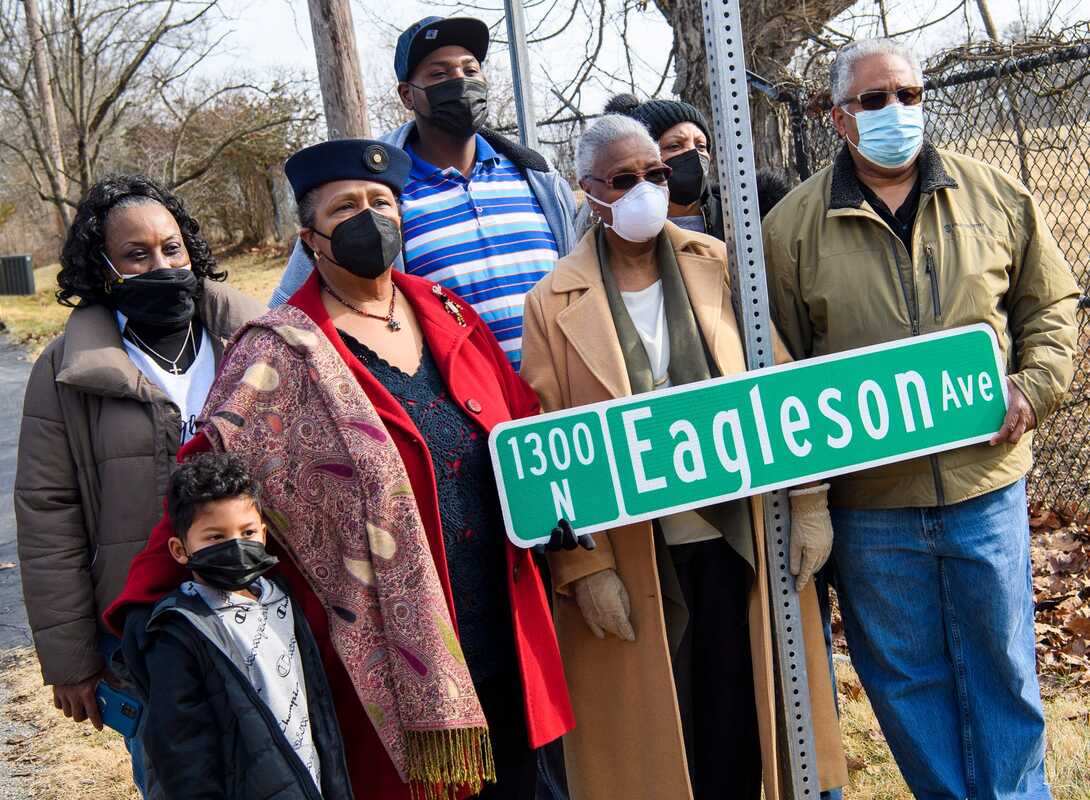 Descendents of H.V. Eagleson gathered together Tuesday to celebrate the renaming of a street in the family's honor. Over generations, the family made a large mark on Bloomington and Indiana University. (Photo provided by The Herald Times).
The Eagleson family includes:

Halson Vashon Eagleson Sr., 1851-1921
Halson was born into slavery in 1851. He came to Bloomington in the 1880s and became a prominent barber, one of the few occupations open to Black people. He had six children who attended Indiana University. In 1910, with legislative approval, he opened Industrial City, a home and farm for “colored” orphans for the State of Indiana in Unionville. Halson was also one founder of Bethel AME Church in Bloomington, where he served as a trustee, steward, and local minister.

A strong advocate for civil rights, Halson sued and won two court cases involving the kidnapping of his son Halson and discrimination by the Nut House Hotel.

Preston E. Eagleson, 1876-1911
Preston was the son of Halson. He was the second Black student to receive a degree from IU. and the first to earn a master’s degree. Philosophy was his major, and he was fluent in several languages. Preston was also the first athlete at IU, playing halfback on the football team from 1893 to 95. He entered law school in 1896 he became a teacher. He was later ordained as a minister in the AME church and was active in the Odd Fellows Lodge, where he was elected Deputy Grand Master for Indiana.

Wilson Vashon Eagleson, 1898-1933
Wilson was the son of Preston. He earned his B.A. from Indiana University in 1922 and shortly thereafter married Frances Marshall, IU’s first Black woman graduate. Wilson moved to North Carolina, where he taught chemistry and coached football at North Carolina Central, where the “Eagles” team is named for him. Wilson earned his master’s in 1926 and later pursued a PhD degree in chemistry at Cornell University.

Frances Marshall Eagleson, 1898-1987
Frances enrolled at IU in 1915, reportedly with $1.25 in her pocket. Four years later, she became the first Black woman to graduate from IU. The Neal-Marshall Center at IU is named for her, and North Carolina Central University named a dormitory after her where she taught and served as the Registrar for over 45 years. After retiring from North Carolina Central, she served as Registrar at Florida Memorial College and Spelman.

Halson V. Eagleson, Jr., 1903-1992
Halson was an IU student and leader of the IU marching band. He was the first Black person to earn an “I” letter for marching band, but a racial incident delayed the award. He was kidnapped (reportedly by white students affiliated with the KKK) to prevent him from performing at a Purdue game and earning the letter. Three students were tried for the crime, but an all-white jury did not convict them. Halson became the first Black student to be awarded a doctorate in physics and the first to be elected to Sigma Xi, the honorary science society. Early in his career, Halson taught at Morehouse and Clark in Atlanta. He moved to Washington, DC, where he spent most of his teaching career at Howard University as chair of the Physics Department.

He also served as consultant to the Environmental Protection Agency and advisor to the National Science Foundation, where he was on the advisory committee for Bell Labs. A person of varied interests, Dr. Eagleson played the piano, saxophone, clarinet, and violin, and spoke fluent Spanish, French, and German.

Oran Wendle Eagleson., 1910-1997
Wendle was the son of H.V. Eagleson and an IU graduate. He received his bachelor’s degree in 1931, his master’s in 1932 and his PhD in 1935, in Psychology. Like many other Black people, Wendle could not secure a professional position locally and accepted a position at the North Carolina College for Negroes where he taught psychology, sociology, economics and philosophy. Shortly thereafter, he took a position in Atlanta at Spelman, where he taught and also became Dean of Instruction in 1954. Wendle was also an exchange professor at Atlanta University where he taught graduate courses. In 1970 Spelman made Wendle Callaway Professor of Psychology. Besides teaching, Wendle served as psychometrist for the Veterans Administration after WWII. He has also published extensively in the Journal of Psychology. Wendle was a member of Sigma Xi, American Psychological Association, The Association of Black Psychologists and several others.

Elizabeth Eagleson Bridgwaters, 1908-1999
Elizabeth was the granddaughter of Halson V. Eagleson. She earned her AB from IU in 1930 and had 88 hours of post-graduate work, but the only job she could get at IU was working in the kitchen. Elizabeth rose to be supervisor of dining halls and went on to become the Director of the Housing & Neighborhood Development Department at the City of Bloomington, a candidate for Mayor of Bloomington and Indiana State Representative, an elected member of the MCCSC School Board from 1965 to 1973 and served one term as the school board president. Governor Otis Bowen appointed Elizabeth to three state commissions and received the Sagamore of the Wabash Award. Elizabeth was an active member of the National Council of Black Elected Officials. As head of the Westside Project Area Committee, Elizabeth coordinated the redevelopment of Westside and Miller Drive areas.

She was founder of Citizens for Constructive Progress (aka Near Westside Assoc.), served on the first Civil Rights Commission of Bloomington, was president of the Community Action Program (CAP) and belonged to many other civic organizations. Elizabeth compiled photo exhibits for the Mathers Museum and the Monroe County Historical Museum. She was ordained a minister in the AME Church at age 78 and was a local minister until the fall of 1998, when she was diagnosed with cancer. Elizabeth was voted Monroe County Woman of the Century in 1999.

Wilson Vashon Eagleson II, 1920-2006
Vashon was the son of Wilson V. Sr. and Frances Marshal- Eagleson. He graduated from the Civilian Pilot Training Program in West Virginia in 1939 and enrolled at IU in 1940. He left to join the Army Air Corps in 1942. In May 1943, he graduated from Tuskegee’s Army Airfield and received his pilot’s wings. Vashon was one of the original Tuskegee Airmen who served in WWII. During his tenure with the 15th Air Force, he flew 178 missions providing bomber cover. Vashon remained in the air force for thirty years, serving in the Korean War and Vietnam Conflict. He was awarded the Distinguished Flying Cross, two Purple Hearts, three Presidential Unit Citations, the Red Star of Yugoslavia, the Korean Service Medal, and many others. He retired in 1970 and remained active in the Wilson V. Eagleson Chapter, Tuskegee Airmen, Inc., along with other civic organizations.

Rosslind Marie Eagleson, 1922-2013
Roselind was the daughter of Wilson V. Sr. and Francis Marshal-Eagleson. She obtained her undergraduate degree from Fisk University in Mathematics and received her master’s degree in Mathematics from Indiana University in1952. She continued her studies in Mathematics for a further three years at the University of Michigan. Rosalind was a professor at Hampton University and rose to Dean of the Mathematics Department during her 54 year career there. She was a member of The American Association of University Women, Alpha Kappa Alpha Sorority, Inc., and The Links, Inc. 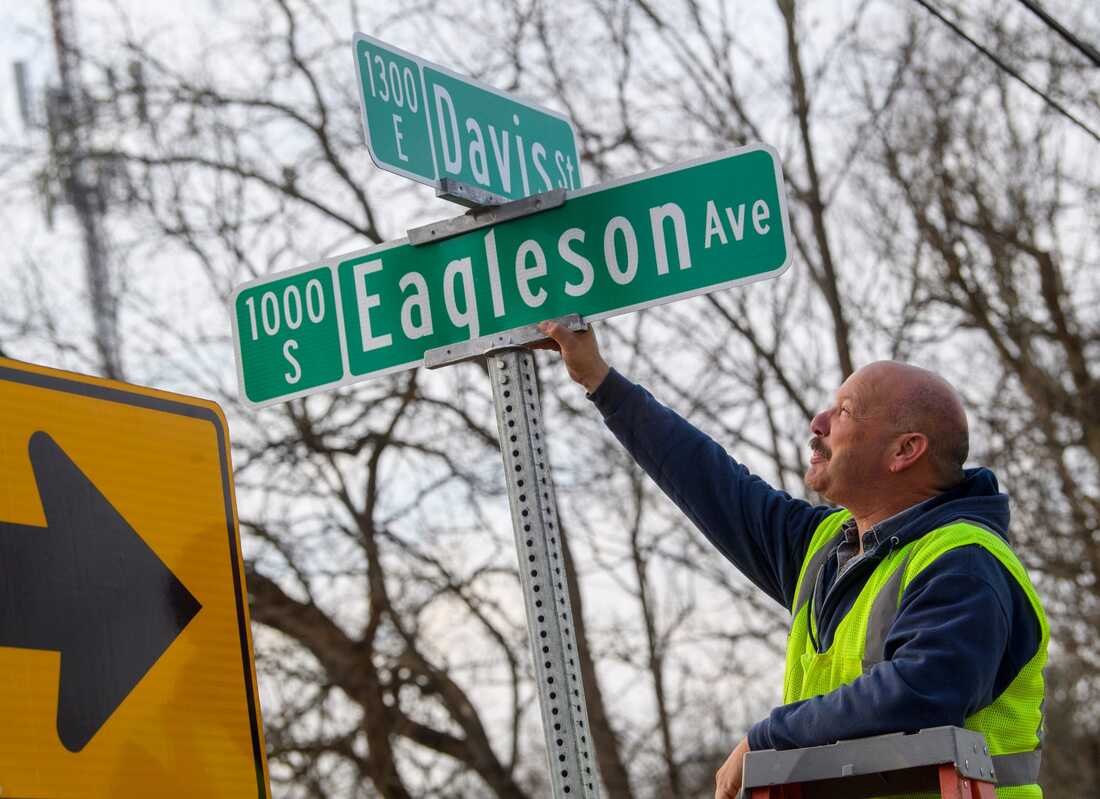 Eagleson Ave signs were installed on February 1, 2022. (Photo provided by the Herald Times).
Background:
A joint City of Bloomington/Indiana University task force convened by Mayor John Hamilton recommended the new name in July 2021 and the Bloomington Plan Commission adopted it on September 13, 2021. The task force based its selections on the criteria that the streets be named in honor of people who were longtime residents of Monroe County, made significant contributions to the community, and had not already received significant city and university honors and awards. The full report and list of task force members is available at bloomington.in.gov/news/2021/07/28/4927.

Family biographies were compiled by the Renaming Task Force and family historian Vivian Bridgewaters. Photos courtesy of IU Archives
Photos in the slideshow are provided by IU Archives, The Herald Times, and the City of Bloomington.

You can find more Black History Month Events on these calendars: